I've never liked Oliver Stone. It's been years since I've seen one of his films. While I might often agree with his political viewpoints, I've never been able to swallow the way he presents them. In his films, every line is so on the nose and each narrative turn seems so perfectly executed that I feel like I'm being manipulated. When it comes to recounting history, his style lies somewhere between that of a snake oil salesman and a tabloid journalist. Or should I say propagandist? Former MPAA president Jack Valenti issued an angry statement shortly JFK was released in which he compared it to Leni Riefenstahl's infamous Triumph of the Will. Having recently seen that film as well, I can say that I definitely don't see many similarities between the two. Triumph of the Will was a product of its time, a monument to Nazi power in a nation that already supported Adolf Hitler. It's impressive, but not persuasive. JFK, however, attempts to sway the viewers' thinking, to convince them of the existence of a conspiracy in the Kennedy assassination in service of the military-industrial complex. And it does so in a way that is masterful, entertaining and timeless.

JFK runs over three hours, but never drags, never misses a beat. The cast assembled to portray the many cogs in the conspiracy is astounding (Joe Pesci stands a head above the rest as a hopped-up pilot and possible CIA operative). Stone paid over $85,000 to use the legendary 8mm Zapruder film which documents the head shot that killed John F. Kennedy, then combined it with incredible reenactments of the events surrounding the assassination to enhance the conspiracy theory laid out by New Orleans DA Jim Garrison (Kevin Costner) in the film's climactic courtroom sequence. These reenactments, along with the montages of Garrison's investigations and various imagined historical flashbacks, are edited together with such speed and dexterity that it's impossible to distinguish the real and fictional elements of Stone's account. As a result, the conspiracy theory laid out in JFK is nothing if not easy to believe. The official "single shooter" theory that the Warren Commission produced is so inconceivable that we want to believe anything else offered to us. 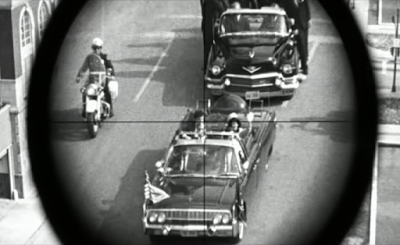 But in the end, this is just another theory, although it's presented so convincingly that it looks like fact. Are we really supposed to believe that Lyndon B. Johnson really told the National Security Council, "Just get me elected, I'll give you your damn war," days after the "coup d'état" that killed Kennedy and gave Johnson the presidency? Is it possible that Lee Harvey Oswald wasn't even in the sixth floor window of the Book Depository when the President was shot? Like Garrison, presented in the film as a noble crusader for the truth, Stone seems to have been primarily motivated by a desire to get the assassination back in the minds of the American public - even if it took creating an alternate "counter-myth" to accomplish it. He certainly accomplished this with JFK, but the idea that many might accept its earnest speculations and documentary-style reenactments as fact is deeply troubling and tarnishes any positive effect it might have had in its call for the truth.