"I thought you hated the theatre?"
"I do. I also hate the sight of blood, but it's in my veins." 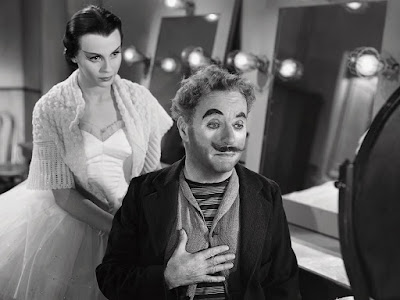 In a way, I could say that I owe my love of film to Charlie Chaplin. The Gold Rush was the stepping stone that led me to look beyond Oscar winners to find great films from the silent era and around the world. It's the movie that made me thirsty for as many films as I could get my hands on, leading me to look for lists like this one. In the short term, it also made me an avid Chaplin fan, leading me seek out all of Chaplin's silent features, and later shorts. The Great Dictator and Monsieur Verdoux came later. But something always kept me from venturing on to Limelight. Although he made two films after this, this one always seemed like Chaplin's swan song, and I preferred my memories of his earlier films to be kept intact - without the taint of melancholy and old age. 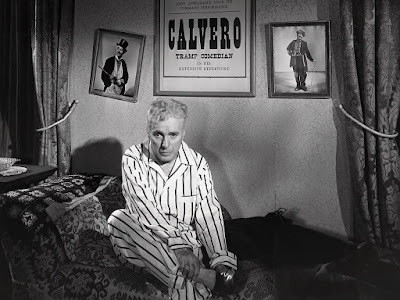 Of course, Chaplin's best films always tread the line between comedy and pathos. Limelight is no different. It is a self-indulgent passion project, with a fair amount of material that could have been trimmed to make it tighter and more focused. It's about a washed-up old vaudeville star who saves a beautiful young ballet dancer, only to have her fall hopelessly in love with him - an old man's fantasy which was echoed by Chaplin's own obvious weakness for beautiful young women in his own personal life. Thankfully, Chaplin's Calvero takes the high road in his relationship with Claire Wright's emotionally fragile Theresa, with his greatest fault being his penchant for long-winded philosophical monologues - an unfortunate hallmark of Chaplin's sound films. 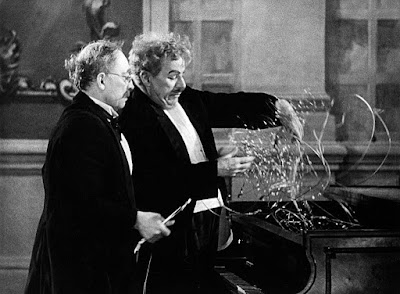 So although not without its weaknesses, Limelight is still pure Chaplin. It's one of his most personal films, one which finally bridges the gap between his vaudeville beginnings in London and his success as a Hollywood comedy star. The vaudeville scenes are the unexpected highlight of the film - showing not the Tramp, but Chaplin the entertainer, his craft stripped down to its bare essentials. The collaboration with Buster Keaton at the film's finale only lasts for one brief scene, but it features some brilliant physical comedy that proves that these masters of silent comedy had it in their blood. The film denouement is a mix of heroic, tragic, romantic and poetic. There may have been some delusions of grandeur on Chaplin's part, but there's no doubt that he bared his soul here, in the film that could be seen as the great comedian's last true stand in the limelight.