1939... The year of The Wizard of Oz, Gone With the Wind, and Mr. Smith Goes To Washington. What a different world we see today than the one in those beloved films from Hollywood's Golden Age (especially when it comes to the last of the three). But Howard Hawks' Only Angels Have Wings is one film from that year that doesn't get a lot of fanfare. On the surface, it might seem like a typical Hollywood film to modern viewers. Cary Grant, Jean Arthur, and Rita Hayworth all share the screen in an imagined South American locale where passions run high, the liquor flows like water, and hard-boiled men do their best to never ask a woman for anything. Everything is shot on a studio backlot and the story swivels on a dime, with increasingly improbable plot twists and dynamic character development. Even so, more than most other films being made by Hollywood at the time, Only Angels offers a view into something real and vital about its era. 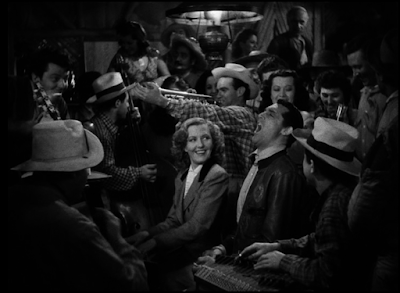 It may have been made on a backlot, not in "Barranca," but this tale of daredevil pilots tasked with carrying the mail across a perilous mountain pass is given a boost of startling realism by its director, Howard Hawks, who brought his real-life as a WWI fighter pilot to the film. The dialogue and situations feel realistic not because they were filmed with real stunt pilots in real locations, but because they were overseen by someone who knew the subject. In one early scene, a fresh-faced young pilot who spends the first ten minutes of the film sweet-talking Jean Arthur's bombshell cruise ship entertainer finds himself blinded by fog and unable to return to the air field. Suddenly, the light, almost screwball mood of the film's opening scenes turns to nail-biting suspense as we watch Cary Grant and his team of pilots and radio operators attempt to guide the boy down safely. The attempt is unsuccessful, but there are no orchestral swells on the soundtrack - just the sound of an airplane's engine, the bang of the crash, and the ensuing silence. 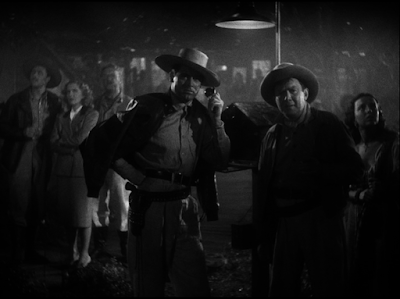 But just as soon as the kid meets his untimely death, life in Barranca returns to its normal pace. A round of drinks is ordered and songs are sung, suddenly turning a moment of mourning into a musical. In this way, Hawks manages to cram action, comedy, romance, musical, existential drama, and suspense into a single film. Like the best of Hawks' work, Only Angels Have Wing seems to ramble along effortlessly, throwing the viewer right in the middle of a world that's just as exciting and full of life as its characters. Viewers today might not always recognize the world of 1939 - where women fight for the love of men who refuse to open up to them and the men are tethered to a cult of masculinity where nothing is more important than the perilous jobs they do together. Even so, it's fascinating to see the ideals that people strove for almost 80 years ago - and no one could have brought this world to life as vibrantly as Howard Hawks did here.

The Cook, The Thief, His Wife and Her Lover (1989, Peter Greenaway)

What a film to start the new year with... It's hard to think of a movie more unpleasant than Peter Greenaway's The Cook, The Thief, His Wife and Her Lover. From the opening scene, Greenaway seems to be doing his utmost to disgust and upset the viewer. After a graceful tracking shot that works its way up from a basement where mangy dogs chew on bloody bones to a loading dock awash in neon blue, we watch the titular thief, a criminal boss and restaurant owner, subjects a naked client to a sickening humiliation involving dog excrement, presumably as punishment for being late on his payments. This scene seems strategically positioned to weed out any potential viewers who might not have the stomach to stick around for the rest of the film, as nearly every scene that follows is uncomfortable to watch in one way or another - even if it's just the tension felt watching two lovers make love in a restaurant's holding room for dead poultry.

Most of the film takes place in said restaurant, where all four characters listed in the title congregate nightly over the course of about a week. The aforementioned thief is a degenerate named Albert Spica (Michael Gambon) who fancies himself a restaurateur, despite his lack of obvious lack of knowledge about food or anything having to do with polite culture. He ridicules and abuses everyone in sight, including the long-suffering cook Richard (Richard Bohringer), who is the embodiment of the refined gourmet culture that he despises and simultaneously tries to emulate. Albert's wife Georgina (Helen Mirren) - he calls her "Georgie" - shoulders the brunt of his abuse. He openly gropes her at the dinner table, humiliates her in front of his thugs, and mocks her sophisticated taste in food, but becomes murderously jealous when she starts an illicit affair with a fellow diner, a soft-spoken librarian named Michael (Alan Howard).

At the time of its release, during the height of Thatcher-era Britain, many reviewers saw The Cook, The Thief, His Wife and Her Lover as a bitter critique of her administration's damaging effect on British society. Today, seeing that the memory of Margaret Thatcher isn't fresh in many peoples' minds anymore, especially outside of the UK, contemporary viewers might be more inclined to read The Cook... in the context of a certain American president's destructive effect on our society and the world at large. Either way, Greenaway himself described the film as a political statement, although left it up to viewers to decide how to interpret that statement.

Regardless of how you choose to read the film's barrage of disgusting imagery and indiscriminate cruelty, trying to place the film within a neat allegorical framework is a fool's errand. But it would be just as foolish to disregard Greenaway's bizarro stylistic innovations, which are ultimately more important than the film's allegorical implications. Set in a world where criminals dress in garish costumes that match the Baroque painting hanging on the wall behind them and change depending on the color scheme of a given room, The Cook... always remains firmly outside of the real world. While Greenaway's style had always been painterly, and here that instinct is taken to the utmost extreme, The Cook... is equally theatrical. The dialogue almost sounds like Shakespeare at times - rambling, gaudy and dramatic - with every character other than the four leads acting as mere ciphers for the main characters to play off of. The sets explode with garish colors and form a self-contained world which we are hardly ever allowed to leave.

But for all Greenaway's artistic flourishes and provocations, the film's final punchline falls flat. Like the final dish itself, the twist is overcooked and unnecessary. It is all too neatly thought out and artificially constructed, like the film's elaborate sets and color-coded visuals. In short, the defiler of culture is put on trial by his victims and forced to eat the fruits of his cruelty, the byproduct of his destruction. No matter what the film's other parallels with real life might be, this is one aspect that would be impossible to draw any real world parallels to. Even if the rest of the film can be read allegorically, it might be more accurate to read the film's grandiose finale as Greenaway's revenge on everything that he hated about humanity. For him, this revenge was clearly an "affair of the heart," the gut-wrenching final destination of a cinematic tour de force that attempts to cram as many of his artistic ambitions as possible into each frame while making the viewer gorge themself on his misanthropic feast.