Many great directors have continually recycled the same themes over the course of their careers, but few have made films like 2046, which is essentially a pastiche of Wong Kar-Wai's past work made by Wong himself. The two of his films referenced most heavily here are Days of Being Wild and In the Mood For Love. Many of the main characters and visual tropes from these two films resurface in this film, although it is as if they are being viewed through a new lens. This is partly due to the film's strange science fiction sequences, which are scattered throughout the film at intervals, but that is not the only reason. More important is the way that characters and themes from Wong's previous films are recontextualized, altering the way that they are remembered and expanding upon the ideas proposed in those earlier movies.

Wong also tackled a difficult concept in 2046 - following a writer's creative process and the connection of their work to their personal life. A few films, like Spike Jonze and Charlie Kaufman's Adaptation, have managed to do so in a way that is vivid and exciting, but most of the time this is a concept which misses the mark. Wong does some very interesting things with it though, building the film's narrative around the concept of a man trying to forget his one true love, the one that got away, while writing a science-fiction story as an allegory for his own struggle. The two main characters from In the Mood for Love are reprised here - the writer, Mr. Chow (Tony Leung) and his lost love, Su Li-zhen (Maggie Cheung) - but neither appear exactly as they did in that film. Instead, the characters are reinvented, each are occasionally replaced by surrogates (played by Takuya Kimura and Gong Li, respectively), and Mr. Chow's story expands to include casual relationships with a number of different women (played Zhang Ziyi, Carina Lau and Faye Wong).

If this sounds complicated, that's because it is. But for most of the film, Wong's winding, fractured approach works quite well. It isn't until the final section of the film, when he begins indulging in turgid repetition and attempts at profound poetic statements that the film's precarious sense of balance begins to fall apart. As with most of Wong's work, 2046 is most notable for taking chances and going places that most other films don't go. However, with this quality comes a lack of restraint and structure, which ultimately causes 2046 to collapse under its own weight. But before this happens, the film manages to be an effective summary of Wong Kar-Wai's career as well as a daring exploration of new territory. By the time he got to Happy Together, his sixth feature film, Wong Kar-Wai had the mystical epic Ashes of Time, the internationally successful Chungking Express and Fallen Angels, its darkly comic companion piece, behind him. Viewed alongside these other films, Happy Together seems to have been Wong's attempt to reset his stylistic agenda and move away from these previous works. Although it continued his collaboration with virtuoso cinematographer Christopher Doyle, the film's look is initially rough and unpolished, even amateur at times - especially compared to the visual grandeur of Wong and Doyle's previous collaborations. But as the film unfolds, this grimy visual style gives way to a psychological intensity that had not been so nakedly present in any of Wong's previous films - even Days of Being Wild. The story, with Wong's typically loose touch, follows two men (played by Tony Leung and Leslie Cheung) who cycle through variations on their mutually destructive relationship over the course of an extended trip to Argentina. The feelings here are raw and intimate, and also instantly relatable.

Like Days of Being Wild, Happy Together features one haunting central image which exists outside of the characters and represents something larger than them. The image in Days of Being Wild was that of a thick, overpowering jungle in the Philippines - lush green in color and symbolic of the characters' imprisonment by their respective desires. In that film, this crucial image is shown in an extended shot following the opening sequence, and again in the final section of the film. In Happy Together, the same technique is used, but this time the image is a distorted vision of the Iguazu waterfall on the border between Argentina and Brazil, the lovers' original destination upon their arrival in the country. For the characters, it is a dream kept alive by a lamp with the waterfall's image, which Tony Leung's character keeps in his Buenos Aires apartment.

The image of the falls, shown once early in the film and in another extended shot at the end of the film, takes the viewer away from the central storyline and magnifies the scope of the characters' feelings. This technique creates a meditative atmosphere in which the story and themes expressed in the film become symbolic and universal. In this way, the falls are a classic Wong Kar-Wai image. Simultaneously beautiful and terrifying, this image is perfect for a film about a torrential relationship which destroys both participants while simultaneously providing them with the companionship they crave in each other's absence. 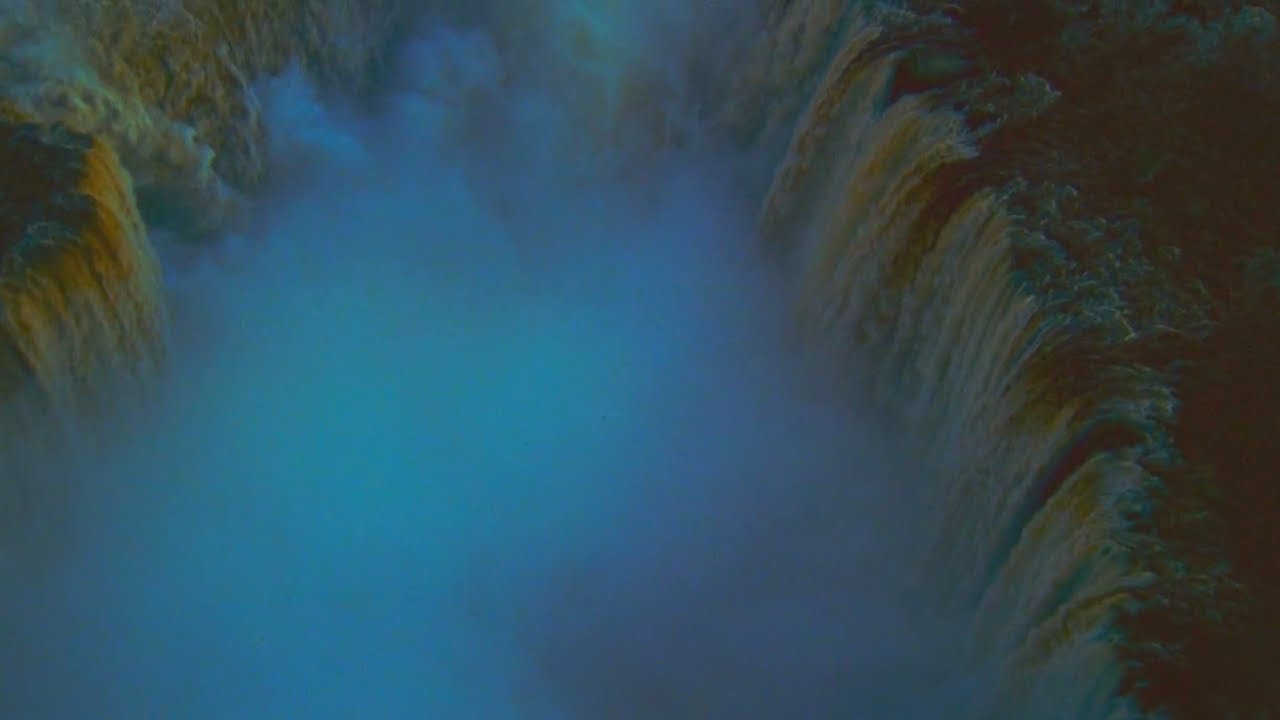 Days of Being Wild begins in an arresting fashion, showing a series of encounters between a brash young man (Leslie Cheung) and a shy young woman (Maggie Cheung) at the deserted shop counter where the woman works in early 1960s Hong Kong. As with much of the film, these scenes seem to occur in a theatrical dream world where the real world rarely seeps in. The man, York, unloads his rage towards his adoptive aunt and the mother he never knew by seducing women with his rough charm and then degrading and dismissing them once he has them on the hook. A number of other characters gradually enter the picture, although the feeling of confinement and emptiness persists.

As a result, Hong Kong is shown in a completely different light from its usual cinematic image. Despite a few brief outbursts of violence (also in confined settings), there is little kinetic energy, no bustling street life - just a subdued landscape populated by characters invested in their own solitary emotional angst. Although it's sometimes difficult to become invested in the emotions of these flawed and insecure characters, the film was the first collaboration between Wong and master cinematographer Christopher Doyle (who also worked on later Wong films like Chungking Express and In the Mood for Love), and as such it is always visually stunning. The color palette is lush and cool, while the textures convey a general atmosphere of grimy and stifling humidity. There's also a feeling of the characters existing on a lone outpost at the edge of the world, which is amplified in the final section of the film, as York and ex-policeman Andy Lau as embark on a doomed train ride through the Philippines' tropical jungle that feels like a journey to nowhere. 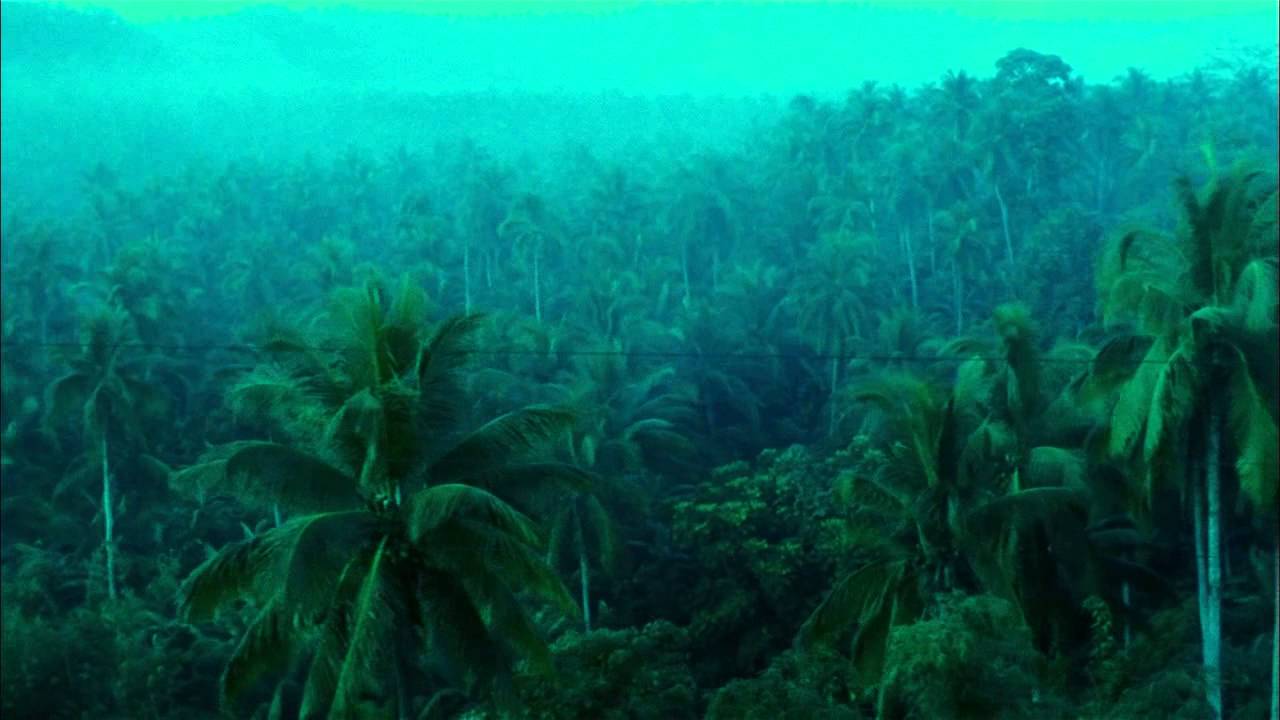 While the majority of the film is fairly straightforward despite the strange theatrical atmosphere and  lack of closure or resolution between the characters, the ending section provides a template for Wong's later experimentation with time and narrative structure. Glimpses of the two women seduced by York earlier in the film (Maggie Cheung and Carina Lau) are interspersed with shots of a clock and a ringing phone. But the two male characters are suddenly replaced by a third, a well-dressed man played by Tony Leung (who would later star with Maggie Cheung in In the Mood for Love), shown in dressing for a night out in a cramped apartment. This scene plays out in one long dramatic long take, and the musical theme seems to connect this unknown character to York and Lau, suggesting some type of connection between the three - maybe even some type of transfiguration. 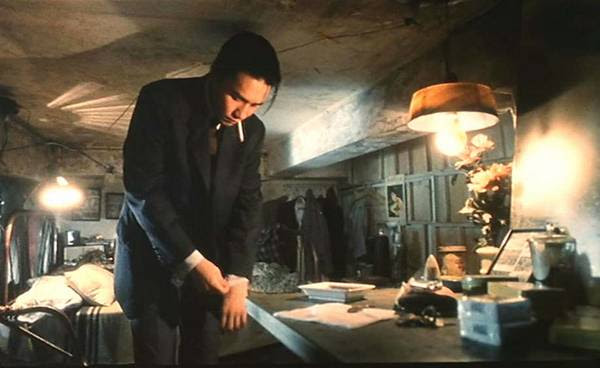 This unexpected and mysterious ending is reminiscent of the sudden gear-shift at the end of In the Mood for Love, which casts everything that came before in a new light. Here the intended meaning is less clear, but the effect is no less beguiling. In any case, while Days of Being Wild is not as satisfying as Chungking Express or In the Mood for Love as a whole, Wong and Doyle's visual mastery was already on full display in this early work, and many of Wong's later themes and narrative devices can be traced back to this film (which has been said to form an informal trilogy with In the Mood for Love and 2046, Wong and Doyle's last collaboration to date).
Posted by Wise Jake at 2:56 PM No comments: