I watched Naked in the midst of a raging Saturday afternoon thunderstorm, with frequent bursts of thunder sending vibrations through the floors of my apartment building and drowning out the dialogue at certain points. This turned out to be the perfect complement for the film. It's a lightning bolt of a film for those who like their coffee black, their whiskey straight, and their emotions raw and hard to handle - which Naked certainly is. David Thewlis's Johnny, the film's main point focus, is a real force of nature, tearing through the surroundings of everyone he meets like a wrecking ball, seemingly oblivious to the destruction he causes. He's a terminal misanthrope who makes an instant impression on those around him with incessant sarcastic rants about the apocalypse and the insignificance of human life, sometimes causing them to lash out in anger but more often impressing them and drawing them in. 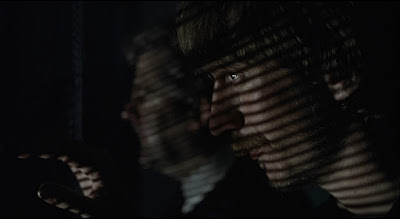 Women, in particular, seem drawn to Johnny's outgoing nature and sarcastic charms, despite his filthy, unwashed appearance. He is also drawn to almost every woman he meets, although after charming them he invariably abuses and abandons them, leaving them frustrated and broken. The fact that Johnny is oblivious to the pain he causes might not make him innocent, but it does distinguish his actions from the willful malevolence of the rich sadist Jeremy (Greg Cruttwell), a minor character who serves as a counterpoint if not a complete foil for Johnny. Whatever their motivations, though, none of the men in Naked treat women well, and in fact precipitate many moments that will be triggers for those who have been victims of domestic abuse or sexual violence. Neither do any of the women in the film seem to have much self-respect or confidence, including Sophie (Katrin Cartlidge) and Louise (Lesley Sharp), the two main female characters and objects of Johnny's occasional attention. 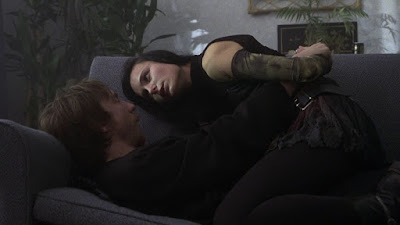 The four characters mentioned up to this point are the ones with the most screen time and presence in the film. However, Naked belongs to the great 1990s tradition of ensemble films that explore the interconnected nature of human life (see Short Cuts, Pulp Fiction, Magnolia, Henry Fool and many others), along with a uniquely sense of pre-millenial existentialism. There is no real plot as we follow Johnny on an aimless week-long ramble through the streets of London, but there are many peripheral characters who drift in and out as Johnny drifts in and out of their lives. These characters are just as richly drawn as the characters given more screen time. Each actor has their own story to tell - of loneliness, confusion, despair, boredom, hopelessness, and any other number of human emotions. Johnny is only a conduit, a lightning rod if you will, positioned by director Mike Leigh in order to provoke and draw out each character's pain and swallow it up for posterity. He's a signature Mike Leigh character: angry at the world, filled with untapped potential, too smart for his own good, and unable to cope with the way things are. As usual, Leigh doesn't suggest that Johnny or any of the other characters can really be changed over the course of the film, but in Naked, he was able to capture the inherent intensity and mystery of their everyday frustrations.