Dr. Mabuse, The Gambler is a startlingly thrilling portrait of what some have described as "film's first supervillain." One only needs to look at the opening scene in which the titular Dr. Mabuse is introduced to realize that "supervillain" is none too strong a term - nor does it come with any of the comic book buffoonery that the term might conjure up. In the film's opening sequence, Dr. Mabuse is in the midst of a convoluted plan to manipulate the international stock exchange by stealing a confidential state trade contract en route to its diplomatic recipient when he notices one of his underlings twitching frantically under the influence of a cocaine high. Fuming, he tells the wired lacky that if he catches him doing cocaine one more time he'll throw him "out on the street like a dog." 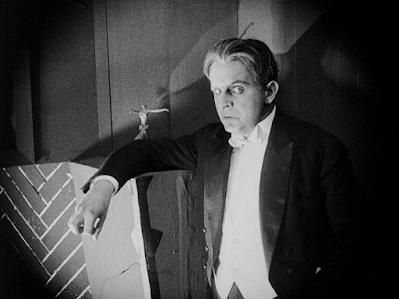 As it turns out, Dr. Mabuse's stock exchange operation is only a prologue establishing his knack for orchestrating flawless criminal operations at any level of society with the utmost precision, not the film's main story. But Mabuse's complete lack of sympathy or capacity for normal human feeling is on full display right from the start, as is the film's cynical and undiluted take on it's era's seediest behaviors. Dr. Mabuse might be the quintessential Weimar Republic film: sprawling, modern, and filled with just about every kind of debauchery imaginable. It's hard to imagine a film this unrelentingly lurid being made in Hollywood any time before the 1970s. 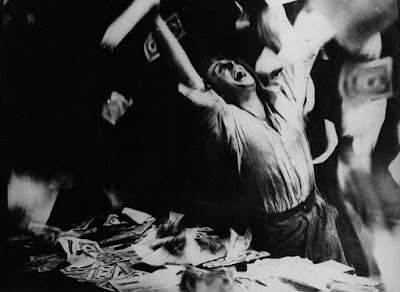 But more important is the enduring entertainment value that Dr. Mabuse still retains almost 100 years later. Even those who have never seen a silent film before, or those who balk at the over four-hour running time, will be amazed by the expert pacing, technical mastery and non-stop suspense on display here. A labyrinthine murder mystery with an elusive master criminal at its center, Dr. Mabuse is often reminiscent of Louis Feuillade's Fantomas serial in its storytelling style, while drawing the viewer in just as powerfully as modern serial thrillers like Breaking Bad. Feuillade's work was groundbreaking and compelling in its own right, and Fritz Lang might well have been familiar with it, but Lang made strides in the thriller genre that even Feuillade couldn't have anticipated. Soon to make some of his most famous films, including the epic fantasy Die Niebelungen and the sci-fi masterpiece Metropolis, Dr. Mabuse shows Fritz Lang already at the top of his game and miles ahead of just about any other director working at the time, anywhere in the world.