Initial viewing: once upon a time... 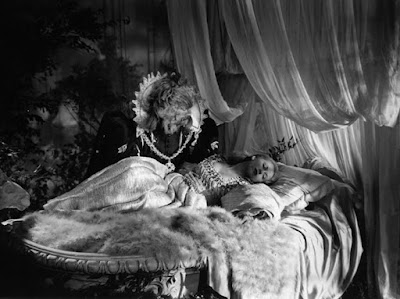 French poet and painter Jean Cocteau made his film debut with The Blood of a Poet, a groundbreaking work of poetic surrealism filmed in the late 1920s and released in 1932 to a thunderous reception that earned him a new status as a legendary filmmaker. His next film, a dreamlike adaptation of Beauty and the Beast, wasn’t released until 14 years later, in the wake of World War II and France’s collaboration with the Nazis. In some ways, Beauty and the Beast picks up where its predecessor left off, but at the same time, it shows Cocteau emerging into France’s postwar period filled with new resolve. The film also gave him a chance to showcase his theatrical muse, Jean Marais, who has a dual role as both the titular Beast and Belle’s human suitor Avenant. 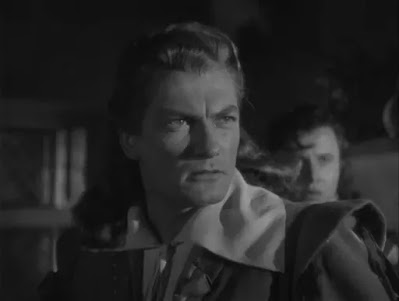 The film opens with an audacious opening credits sequence which breaks the fourth wall by showing Cocteau himself writing the names of the cast on a chalkboard, followed by his own signature. We also catch glimpses of lead actors Marais and Josette Day, after which we see a clapboard and a voice yells “Take 1. Action!” At this point, Cocteau interrupts and gives us an introductory message asking for the viewer’s suspension of belief and “childlike sympathy.” For viewers expecting fairy tales and fantasy right from the start, Cocteau offers some metatextual food for thought that might have influenced the young filmmakers of the French New Wave over a decade later. 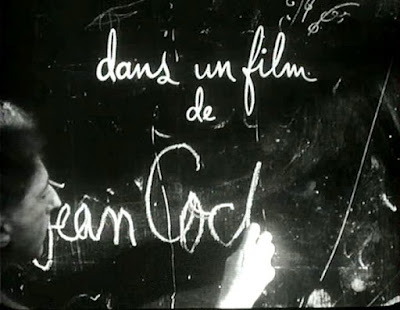 Even without this opening sequence of playful disruption, Beauty and the Beast is unlike any other fantasy film. It doesn't attempt to transplant fantasy into the "real world," nor does it attempt to create an entirely new fantasy world from scratch. Instead, the real world and the fantasy world that it presents are virtually interchangeable. When Belle's father stumbles upon the Beast's manor in the middle of the night, some strange things happen, but it's not until the Beast appears in a brilliantly startling moment that we realize that this is no longer the reality we had become used to. This almost imperceptible shift from reality to fantasy was a trademark of Cocteau's, also featured in all three films in his Orphic Trilogy (including The Blood of a Poet). 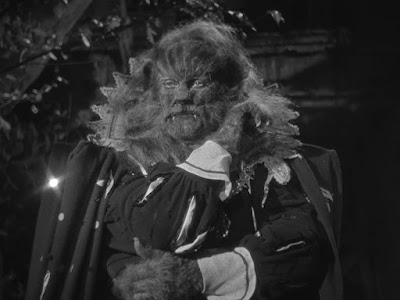 But while the division between the real and fantasy worlds of Beauty and the Beast might be seamless, the fantasy world is definitely not lacking in strangeness. The scene in which Belle enters the Beast's manor for the first time is a tour de force of unsettling set design and atmosphere. The candles are all attached to the walls by human arm fixtures, as are the candles on the dinner table held by similarly disembodied human hands. Typically for Cocteau, these hands are not explained to the viewer. Belle tells her siblings later on that she was waited on by "invisible hands" at the manor, but the disembodied arms and other human furnishings are always visible to us. Without ever being pointed out explicitly, they create an unsettling feeling of a house that is alive--haunted, even, by the memories of the dead. 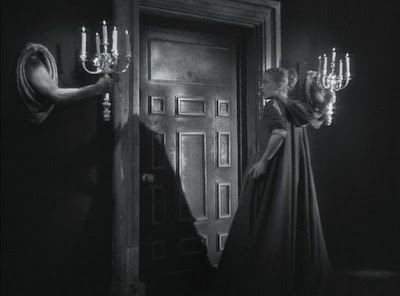 The uncanny and strange moments scattered throughout the film are too numerous to mention. When Belle first arrives at the door to her bedroom in the manor, it’s in a hallway that’s eerily similar to the hotel in The Blood of a Poet. As in that film, there’s a sense that the house is alive, that anything could be hiding behind those doors. At one point, the covers slither off of Belle’s bed like a snake, and the Beast appears howling in pain and engulfed in smoke from some unthinkable ailment. These unexplained moments make the story feel shrouded in “unreality,” the quality that Cocteau always strived to capture in all of his work. 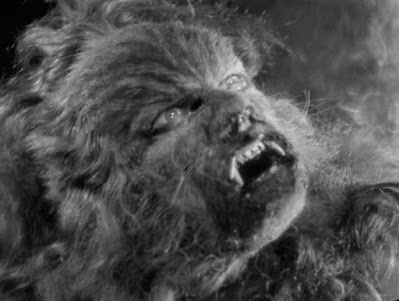 As it is an adaptation of a fairy tale, it stands to reason that Beauty and the Beast is aimed at children at least to some degree. But while the film’s dark magic and hazy mysteries might be what stands out most to young viewers, as they once did for me, adults are more likely to be entranced by the film’s shades of romantic beauty and poetic twists of fate. The two sides play against each other like two sides of a coin--like the juxtaposition of fantasy and reality, or the contrast between real life and its reflection in the Beast’s magic mirror.
Posted by Wise Jake at 2:33 AM