Having taken university courses on film history, watched Breathless and Contempt numerous times, and even dipped my toes into the more treacherous waters of Jean-Luc Godard's 1970s leftist revolutionary era, I tend to feel that I have a pretty good grasp on what Godard means to film history. However, I've also found most of Godard's work after about 1966 (except for Histoire(s) du cinema) to be difficult and tedious being one factor, and as a result have often felt that I'm "finished" with his films, despite the fact that I had only seen 12 of his roughly 70 films up until now. What's more, as this post confirms, there are still a number of Godard's pre-1966 films that I haven't seen yet! 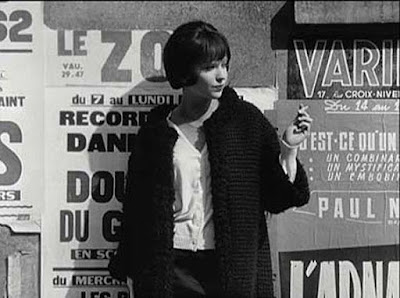 If your history with Godard is anything like mine, I urge you to set aside whatever preconceived notions you might have about the man and make time for Vivre sa vie. It's a near masterpiece which differs drastically from its two predecessors Breathless and A Woman is a Woman. The latter of those films was the first Godard film to feature his wife and muse, the Danish beauty and quintessential symbol of the French New Wave, Anna Karina, who is also the star of Vivre sa vie. It's a tragic story about a young woman who becomes drawn into a prostitution by necessity, in which Godard typically eschews traditional narrative devices and makes his own rules. 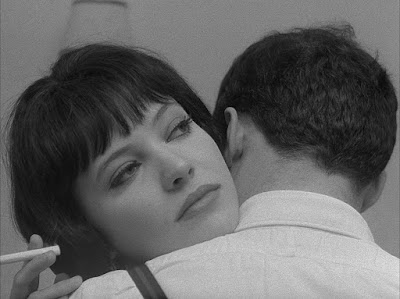 At times, Godard's approach almost feels like an experiment in what would later be described as "formalist cinema." Less a straightforward narrative than a series of vignettes, the film presents its story in twelve roughly 10-minute segments, which generally consist of a single unbroken scene. The film's first scene after the opening credits montage show Karina's Nana and her estranged boyfriend arguing at a cafe -  although we only see their heads from behind. This is a typically provocative move by Godard: not only does he throw the conventional shot-reverse-shot style of cutting dialogue scenes out the window, he denies his audience the opportunity to see the characters' faces for almost ten minutes, and during the opening scene of the film! There's also a shocking amount of nudity and sexual frankness in the film that would have been unthinkable in 1960s Hollywood, but Godard's stylistic experimentation is even more shocking in the context of the era. 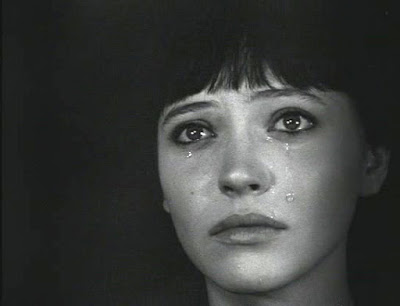 Nevertheless, the film's idiosyncratic cinematography and editing style gives it a slice-of-life quality that anticipates the cinema verite movement (still only a nascent idea at the time) while also channeling, and even lifting a scene directly from, Carl Theodor Dryer's The Passion of Joan of Arc. Karina is often framed to look like Anna Falconetti's Joan of Arc, which is particularly fitting, given that Dryer was Danish but made The Passion of Joan of Arc in France, where Karina also made all of her films with Godard. But rather than a religious martyr, Nana is a martyr for the modern French woman, a symbol for the chronic hopelessness of lower-class women who can't make ends meet without a man or a stable job. By today's standards, Nana might seem like a passive and powerless character only meant to inspire the audience's pity, but even with this in mind, Vivre sa vie is still a hard-hitting and beautiful film that deals head-on with social dilemmas that other directors of the era wouldn't have touched with a ten-foot pole.