If the work of filmmakers like Marcel Carne and Jean Renoir can be described as "poetic realism," then the work of Jean Cocteau should be described as "poetic fantasy." In his first film, Blood of a Poet, Cocteau attempted to crystallize the poetic experience in film form, creating one of the most bizarre and uncanny surrealist films ever made in the process. If it weren't for the brief image of a lyre at the end of that film, it's likely that no one would have connected it with the Greek myth of Orpheus and Eunycide. But as the case may be, it turned out that Blood of a Poet laid a lot of the stylistic and thematic groundwork for Cocteau's modern adaptation of the Orpheus myth over 15 years later. 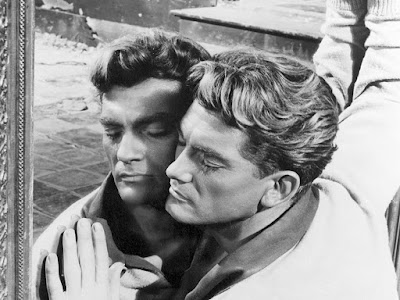 Cocteau's Orpheus transfers the ancient Greek myth to contemporary Paris, recasting the golden-voiced Orpheus as a legendary poet as famous for his dashing good looks as his poetry. When a belligerent up-and-coming rival poet is killed in a roadside accident, he is called to accompany the young firebrand's princess benefactor to a country village where he witnesses the dead man being brought back to life and whisked into a mirror by the princess and her cohorts. The next day, he wakes up by the side of the road as if waking from a dream. Upon returning home, he becomes obsessed with intercepting strange messages from the princess' car radio that he hopes will lead him back to her, neglecting his pregnant wife Eunycide in the process. The princess' concierge, Heurtebise, stays behind and attempts to help the couple, until the revelation that the princess is a manifestation of Death sends Orpheus and Eunycide to the underworld and sets into motion a doomed romance that promises tragedy for all involved. 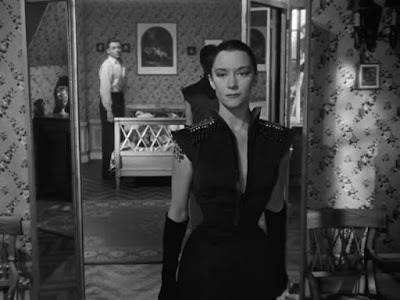 The parallels between this film and Blood of a Poet are unmistakable in retrospect. The idea of mirrors as a portal to an "unreality" that hides man's darkest secrets, is carried over and expanded upon here, as are the special effects which portray characters crossing into this parallel world. No longer does the poet splash into the mirror like a swimming pool, instead being absorbed like a mirage, smoothly and silently. One need only don a special pair of gloves to pass through the mirror's earthly exterior. Then there's the recurring visual motif of statues, the princess of Death watching Orpheus with eyes painted on her eyelids, and the idea of poetry as an art which requires unimaginable pain and self-sacrifice in order for only minuscule returns of success. But while Orpheus shares many surrealist visual ideas with its predecessor, Cocteau presents them here in the context of a coherent, if fantastical, story with a sense of magical fairy-tale wonder that's far removed from the obscure stream-of-consciousness style of Blood of a Poet.