FROM THE VAULTS: Under the Skin (2013, Jonathan Glazer)

Under the Skin is a film about aliens, but it’s not exactly the sci-fi thriller you might expect from that description. Jonathan Glazer (whose other films include Sexy Beast and Birth) created a uniquely minimalist alien world for Under the Skin, daring the viewer to piece together the details of the plot from visual hints such as men sinking into a gooey black ether as soon as they try to approach a disrobing Scarlett Johannson. Johannson’s acting is intentionally robotic; she hardly utters a word of dialogue unless she’s trying to pick up a Scottish bloke off the street. In these street scenes, she’s like a psychoanalysis app powered by Siri, bluntly asking personal questions which suggest a desire for intimacy to her male prey but in reality serve only to establish whether the man is lonely and unattached. 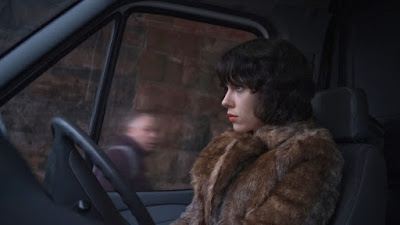 But what about her reason for picking up these horny men and luring them to their doom? None of this is explained to the viewer. Even the idea that Johannson and her superior (Jeremy McWilliams) are aliens is only an inference to be drawn from 2001-esque lights and a robotic voice reciting English words in the opening sequence. The two characters don’t exchange a single word of dialogue in the entire film. What happens to the men after they’re captured by Johannson isn’t revealed until over 30 minutes into the film, and even then is only conveyed in the form of an abstract series of nightmare images. 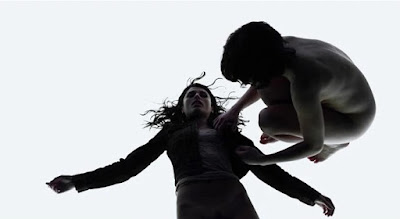 Glazer ostensibly intended to show viewers how aliens might realistically act if they touched down on Earth to suck out the insides of the locals. They probably wouldn’t speak in any human language unless they needed to interact with people directly. They probably wouldn’t show any kind of recognizable emotion. And however they chose to devour their humans, you can bet that it wouldn’t be with a fork and knife. (So how would they do it then? Well, in one ominous scene, we see a man’s body instantaneously collapse into a filmy membrane, followed by a shot of juicy guts rolling down a conveyor belt to be transformed into a bright red beam of light. From there on, it’s anyone’s guess.) 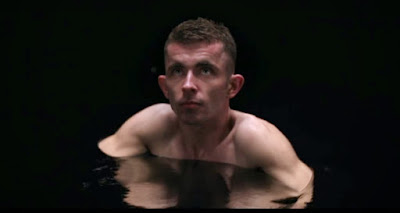 Mica Levi’s dissonant score plays a key role in creating an atmosphere of weirdness and alien loneliness. We feel dread for the fate of the anonymous men before they even start to sink, and moments of silence are given all the more ominous weight by the squirm-inducing punctuation  from Levi’s viola. The absence of music in the street scenes, as Johannson talks to passersby (many amateurs who initially didn’t know they were being filmed), creates a cinéma vérité mood that makes the music all the more effective when it does come in, while also echoing the emptiness of the lives of the men that Johannson preys on. 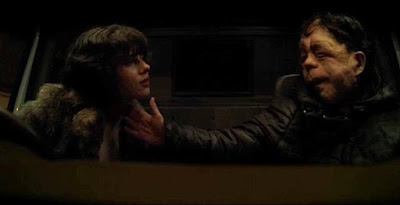 This is especially pronounced in the film’s pivotal scene, in which Johannson picks up a man with a horribly deformed face (Adam Pearson) on his way to the supermarket at night. In this scene, her exploitation of his loneliness and longing for human connection feels unbearably cruel--a feeling which also registers with her for the first time when she is unable to go through with her nightly ritual and, in doing so, resigns herself to a human life of loneliness . It’s this quality, the delicate balance of realism and otherworldly discomfort which gives the film’s weirdness weight. Under the Skin doesn’t give the viewer any answers or explanation, instead merely posing the question “What would it be like to be an alien among everyday humans?”