I saw Nostalghia for the first time at an all-night Tarkovsky marathon at a Tokyo cinema (along with Solaris and Mirror). I had seen the first two films before (you can find my post on these films here), so having only Japanese subtitles for these was not a problem, but for Nostalghia, often described as one of Tarkovsky's most opaque films to begin with, I initially missed a lot of nuance and subtext as a result of my limited understanding of the dialogue. However, what I got from it is this: a Russian poet goes to Italy but is quickly overcome by nostalgia for his home country and the urge to sacrifice himself for the greater good of mankind (or maybe for merely personal reasons). Along the way, Tarkovsky ties melds this story with themes of faith, family, cultural philosophy and dream-like imagery to form a powerful, hypnotic whole.

When I watched the film later, with English subtitles, I was able to catch many of the deeper resonances suggested by the dialogue and, with considerable irony, the idea that art is inherently untranslatable. Eugenia, Andrei's traveling companion, translator and foil in the film, suggests that music is an exception to this. Many of the readers of this might also feel, like I do, that film is another artistic medium with the potential to "abolish the frontiers" between countries and languages. I think that my experience at a one-screen repertory theater hidden in a narrow Tokyo alley is a perfect example of this. Without the aid of my native language, I was able to watch films presented in foreign languages that I understood little to nothing of and come away with a greatly enhanced appreciation of their director and his uniquely poetic visuals and themes. 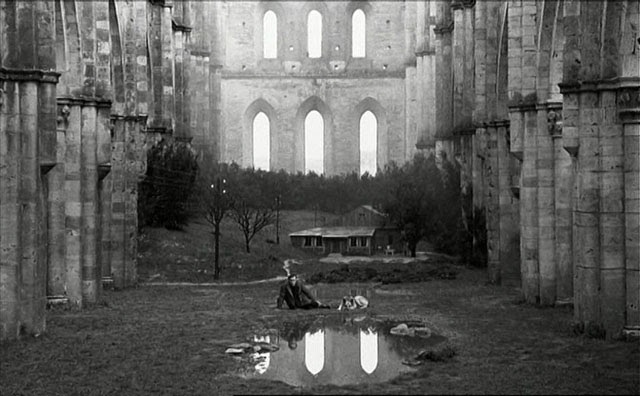