On the surface, Michael Haneke's Caché is a mystery film, a psychological thriller about surveillance - the feeling of being watched by an unknown entity that can see your every move. However, its central mystery is never solved, with Haneke pulling back layer after layer and making the mystery progressively more complicated and disturbing - ultimately refusing to satisfy viewer expectations like most other mystery films. The result is a master class in creating and sustaining tension. The creepy atmosphere that Haneke creates never lets up; there's always a sinking feeling that the unknown stalker is hiding just around the corner, just waiting to be revealed. There's plenty of tension in earlier Haneke films like Funny Games and The Piano Teacher, but also a breaking point where that tension explodes into violence. In Caché, by contrast, little violence is shown on screen. And even when it is, it only results in the creation of further tension and uncertainties. 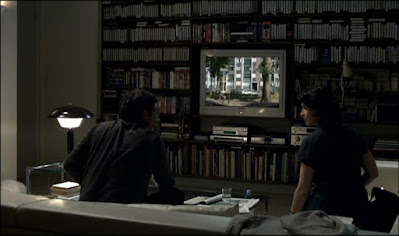 What is certain is this: Georges (Daniel Auteuil) and his wife Anne (Juliette Binoche) are being harassed by a stalker who sends high-quality videos of their apartment shot from the outside, filmed by someone close by but never seen. The videos are also accompanied by bloody drawings that seem to recall an incident from Georges' childhood which is never revealed fully. In any case, the incident involved a young boy, Majid, the son of Algerian immigrants killed in a 1961 massacre in Paris. Georges' parents had intended to adopt Majid after the death of his parents, but six-year-old Georges used lies and intimidation to have Majid sent to an orphanage away from their family. As an adult, Georges still can't face up to this incident from his childhood. He can't even tell his wife about it. Nevertheless, he is forced to reckon with the past when he suspects Majid of sending the tapes. 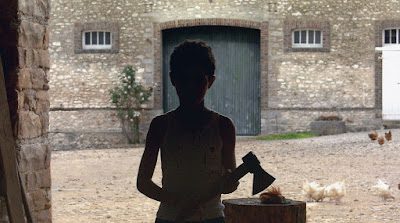 The first half of the film unfolds much like you would expect a French thriller about sophisticated upper-class Parisians to unfold, with the characters going about their daily routine, arguing with each other, having dinner with friends, and avoiding going to the police for fear of alarming their son or acknowledging to themselves that there is a serious problem. But when Georges refuses to tell his wife who it is that he suspects of sending the tapes, it causes a serious rift in their relationship. From this point on, he is filled with indignation towards Majid for causing him to remember his cruelty as a child and thus disturbing his comfortable existence. When he meets Majid (Maurice Benichou), the man who he had wronged so many years ago is gentle, soft-spoken and doesn't seem guilty, but this doesn't stop Georges from taking out his anger on the man once again. 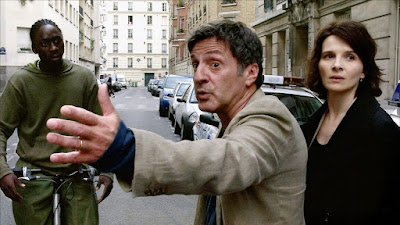 Toward the end of the film, Majid's son (Walid Afkir) confronts Georges and asks him how it feels to have a man's life on his conscience. Clearly, Georges doesn't feel like he had anything to do with ruining Majid's life. Or maybe he just refuses to admit it. Regardless, Haneke's question isn't just for Georges - it's for all French people, or anyone descended from those who systematically murdered and oppressed their colonies' subjects. Can you live with yourself for feeling that your life is more important than the descendants of enslaved or colonized people who live low-rent existences because they weren't able to have the same opportunities as you did? Ultimately, it's irrelevant who sent the tapes. The refusal of people like Georges to face up to the modern realities of a colonial past is the real crime on display in Caché, causing the buildup of a repressed collective guilt resulting in a toxic silence that putrefies society. But, as the film's enigmatic ending suggests, the younger generation is standing witness and won't be as willing as their parents to accept the crimes of their ancestors as a necessary evil best left swept under the rug and forgotten.