DOUBLE FEATURE: Tropical Malady / Uncle Boonmee Who Can Recall His Past Lives

It's amazing to see 21st century films making it so high on the list in recent updates. For some of us who tend to be stuck in film history's past much of the time, these films show that there are plenty of recent films which will go on to take their place in the pantheon before long.

Tropical Malady was my introduction to the Thai director Apichatpong Weerasethakul, whose work I've been meaning to look into for a long time. It might even be the first Thai film I've ever seen (amazingly enough). I didn't know what to expect, but my expectations were still confounded. From the bits and pieces I had heard over the years, I guess I expected it to be visually beautiful but a bit abstract and strange. I had also heard that the second half diverges sharply from the first. Other than this, I went in open to anything. The opening sequence, with a group of soldiers traversing through an open field, posing with a dead body, and flirting with a radio operator as they carry the body, set up a subtly bizarre atmosphere. This mood was only accentuated when a naked man ran through the background as a dream pop song played on the soundtrack. 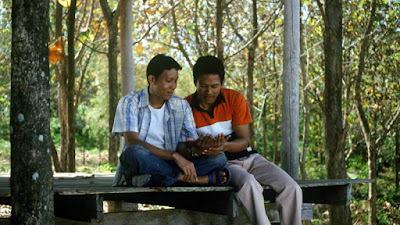 As it turns out, these two threads eventually turn out to intersect, although not in a way that makes much sense. This really is a head-scratcher of a film. After the vague and seemingly random opening, the film becomes a love story between two men, a soldier named Keng (Banlop Lomnoi) and an illiterate ice factory worker named Tong (Sakda Kaewbuadee). It is never clear what draws them together. Tong doesn't seem too outwardly attractive and can barely even write his own name, but he seems to give off a charm that attracts women both young and old, as well as Keng. He also has a mysterious urge to dress up as a soldier, although he isn't one, or at least isn't at the time the story begins. This section of the film reminded me of some other meditative Asian films about loneliness, desire, and living on the outskirts of society (including one I saw recently, Taiwanese director Tsai Ming-liang's Rebels of the Neon God). However, it also has a subtly spiritual and rural feel to it, particularly in a scene where Keng and Tong venture down into a cave temple with an eccentric holy woman. 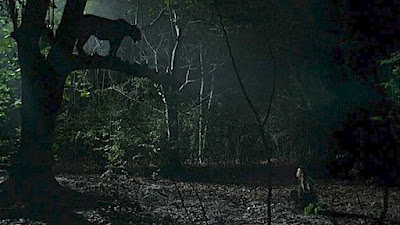 Gradually, the men's tentative passion begins to flower and come out into the open, at which point Weerasethakul abruptly shifts gears. After a strange moment in which Keng and Tong both occupy the same bedroom at separate times, a title screen appears, effectively announcing the start of a new film. Intertitles lay out a folk tale about a shaman who can turn into various animals, mainly taking the form of a tiger, in order to seduce and devour men. Keng reappears as a lone hunter, endlessly trudging through a labyrinthine forest tracking the tiger spirit (played in his human incarnation by Kaewbaudee). When taken together with the opening quotation that "all men are wild beasts" and the love story which occupies the first half of the film, this mystical segment of the film seems to imply that Tong is a beguiling spirit out to devour and become one with Keng. At first, this didn't sit well with me, nor did it seem to gel with the fairly innocent love story laid out in the first half. But as the film reached its conclusion, I began to feel that this is a film about love's overpowering nature. Love has the potential to consume and devour people, chew them up and spit them out, leaving them with no individual identity. The beauty, the uncertainty, and the danger of love ultimately becomes the focus of Tropical Malady, an uneven but startling and thought-provoking film which also provides foreign viewers with a visually and spiritually rich view into Thailand's natural beauty and folkloric traditions.

Uncle Boonmee Who Can Recall His Past Lives (2010, Apichatpong Weerasethakul)

This film's title comes from Tropical Malady - at least, it appeared in a conversation between the two main characters in that film - making the two films an even better double feature than I had expected. In a neat bit of intertextuality, Tong (Sakda Kaewbuadee reprising his role from Tropical Malady) appears again here, and his uncle's name is indeed Boonmee. As for whether or not Uncle Boonmee can recall his past lives, I think it might be more accurate to say that he is in tune with the past, the present, and the future all at the same time. Either one could seep into his life at any time. And so they do, as the ailing Boonmee returns home to his rural farm to spend his last days with his family - both living and deceased. 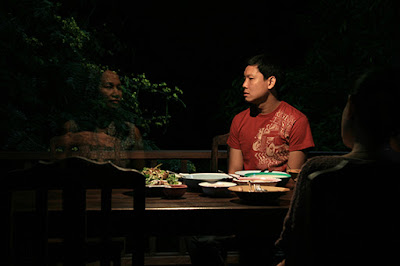 In an early scene, a pair of ghosts suddenly appear to Boonmee while he eats dinner. His family members can see them too. One of the ghosts is Boonmee’s dead wife, while the other is his missing son, who has become a Ghost Monkey, a monkey-like creature of the forest. But the Ghost Monkey isn’t just an animal. Its red laser eyes are reminiscent of the LED light on a camera, suggesting that the Ghost Monkey records its surroundings and stores them as memories. It can’t be a coincidence that Boonmee’s son first stumbled upon the Ghost Monkey’s existence with a camera. However, the memories that these creatures record are not those of the individual, but memories of time and place. As Boonmee’s sister-in-law points out, the ghosts seem to be tied to the farm itself, just like the workers who tend the land. 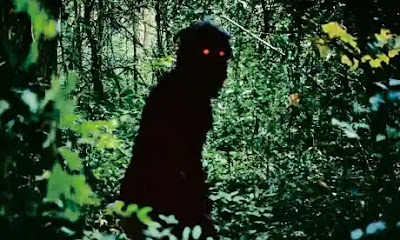 In one beguiling standalone scene, a princess with a disfigured face sees an unblemished version of herself in the reflection from an enchanted lake. After rejecting a suitor for preferring the reflection over her real self, the princess hears the voice of a catfish in the lake, who insists that she is beautiful. Hoping for a transformation, she enters the lake and strips herself of all her valuables, leading to a sexual encounter in which she gives herself fully to the catfish. The scene is shot in an entirely different visual style compared to the rest of the film. It gives off a shimmering blue aura, with a sublime, sensual quality that belies its seemingly unsavory premise. It’s hard to imagine that this scene wasn’t an influence on Guillermo del Toro, who took the idea of a human-fish romance and made it much more literal in The Shape of Water. But in this case, it’s much more open-ended and surreal. It’s unclear if we’re seeing Boonmee in a past life or just someone that he “remembers,” but either way, there’s a spiritual connection that hints at the Buddhist process of enlightenment while being deliriously bizarre at the same time. 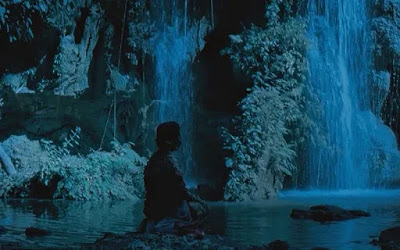 Like Tropical Malady, Uncle Boonmee is an uneven film that is nevertheless filled with interesting ideas and striking visuals. The vivid natural imagery here, portraying dense forests and the interplay of light and color with darkness, is even more beautiful than the earlier film was. There's another prolonged mystical journey sequence here too, although it doesn't occupy half of the film. Instead, the mystical themes ebb and flow throughout the film, rather than being included as a surprise change of pace. This makes the film more consistent, but also means that those concerned with plot coherency and logical explanations should stay away. This film exists in an ethereal ether floating life and death. Its paradoxical notion of life as something fleeting but also continuing beyond death is firmly rooted in Buddhism, although the visual beauty and meditative mood is universal, even if the film as a whole ends up veering more towards the hypnotically weird rather than the truly profound.