Since I am planning to have a post on Béla Tarr's magnum opus Sátántangó up in a few days, I decided to dredge another piece of my past writing up from the depths. At the time, this was the first Béla Tarr film I had seen, and it had yet to enter the 1,000 Greatest Films ranking. Shortly after writing this review, I saw some of Tarr's earlier work, but I am just now getting to Sátántangó. That film, while more famous than Werckmeister Harmonies, has a lot of difficult aspects that are sure to turn off first time viewers. So I still stand by my comment that Werckmeister Harmonies is a good introduction to Béla Tarr's work. If you don't like this one, you'll probably fare much worse with his other films.

One more point: This review contains some detailed description of the film's plot and the meaning of narrative elements, especially those related to the film's climax, so tread lightly if you haven't seen the film before. And as always, thanks for reading. 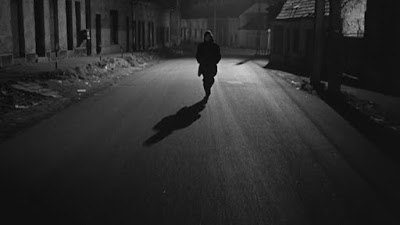 I first watched this film a few days ago, and was subsequently so strangely caught unawares and bothered by it that I was unable to form a judgement on the film based on that viewing of it. After a couple extra days had passed, I decided to give it another go. I don't think this film is quite a masterpiece, but it is great nonetheless - and very multifaceted in terms of theme. It's a horror film definitely, but instead of the "spooks and chills" version of that genre, it's a horror film in the sense that the characters in the film either don't appear to have souls and/or are eventually forced into losing all discernible hope in human nature. This being my first Béla Tarr film, I can't be sure, but for those who know Tarr's work better, I'm sure that "a Béla Tarr horror film" would be a more than fitting explanation of the film's basic nature. That being said, the film looks fascinatingly on the nature of evil (in only 39 sublimely composed and, in my opinion, starkly poetic shots!) in a very quiet and disquieting manner that can be taken countless different ways. Before I get into the more detailed discussion, I will say that although it is a very doom-laden and upsetting film, it is extremely visually beautiful, and I highly recommend it as an introduction to Béla Tarr, it's really very impressive. 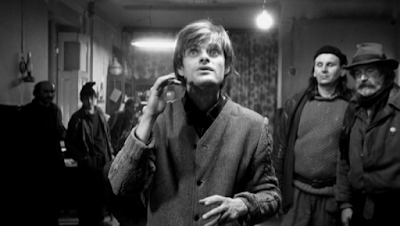 Some discussions I've seen about this film seem to suggest that Janos is the Prince, but I think that is ridiculous because he's listening while the Prince is speaking, the Prince went to numerous towns before the one in the film, and the whole film revolves around the destruction of Janos' idealistic and simple way of looking at life - with the arrival of the Prince, giant whale, and company the catalyst. The film does actually detail a complete transformation: in the opening shot, in the bar, Janos is seen happily directing a set of drunks through a demonstration of how the planets operate. He is shown as one of the most liked people in the town, and intelligent as well. The important thing is, at this point in the film, he is in a position of considerable control and influence in the town - symbolized by his direction of the "planets" in the bar. 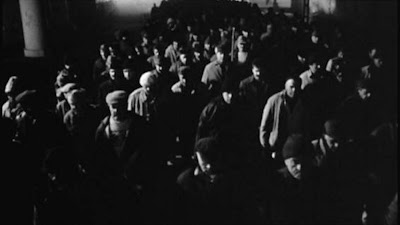 By the end of the film, Janos is completely wrecked and helpless emotionally - having seen his ideals and values beaten to a pulp with the violent riot on the town incited by the Prince the night before. The only thing that remotely resembles hope in the end is that the whale is laying "beached" on the ground amidst the rubble and exposed as a stuffed figurine unable to do any more damaged to the destroyed town. Through the ordeal, Eszter is shown as the only one in the town who escaped it unscathed - but this is only because he believed hope for humanity had been lost with the Werckmeister system of harmonics centuries before. I love his monologue about the Werckmeister Harmonies, especially upon second viewing, because it ties in so completely and mysteriously to the "main action" of the film that is the plot with the whale and the Prince. Auntie Tunde, played by Hanna Schygulla (of Rainer Werner Fassbinder fame) in a comeback role, and the others who are not shown as noticeably evil, seem to have lost their souls in pursuit of a "town cleansing". However vague this aspect of the plot is (and I think it is meant to be that way), it seems to me that this cleansing wouldn't have ended much differently than the riot incited by the Prince. 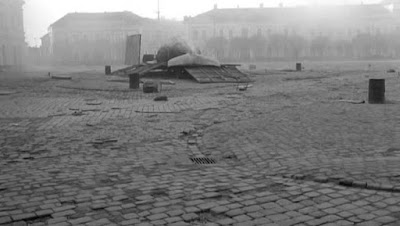 I'm not sure about Béla Tarr as a director yet since this is the only film of his I've seen, but I do think that Werckmeister Harmonies is a great film, and a crowning achievement. I love films that nag at my brain and drive me up the wall for weeks. The same thing happened to me after watching Jeanne Dielman, and the films that have this affect on me are usually very challenging but almost always great.