Underground is a film full of history and chaos, combining the two liberally until they become virtually indistinguishable. It begins with a Felliniesque parade in the street, with two drunken gangsters riding on horseback in front of a brass band. The band will be one of the few constants throughout the story, following the characters through good times and bad. They don’t comment on the action, they just keep repeating the same song again and again--right up until the film’s fantastical Felliniesque ending. Much like the circus in Fellini’s films, the brass band here seems to provide a lifeline to a nostalgic idea of old Yugoslavia, a country that existed “once upon a time.” 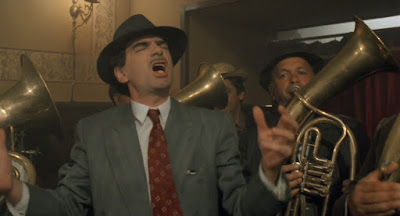 While the band can always be relied on to get the characters up and dancing, the rest of the film is an ever-changing whirlwind of a ride that often jumps forward decades in time without a warning and never gives the viewer a chance to catch their breath. The two gangsters we see at the start of the film turn out to be early members of the Communist Party, which initially means robbing banks and stealing from rich people in the name of the poor. Later, it means resisting the German occupation, and later, it means being in a position of adulation and political power, but the characters always remain the same at heart. They’re drunkards, criminals, womanizers, liars and schemers. One friend, Marko, uses his brains to get ahead, eventually tricking the other, Blacky, into living in the cellar with a large group of fellow refugees for 20 years. 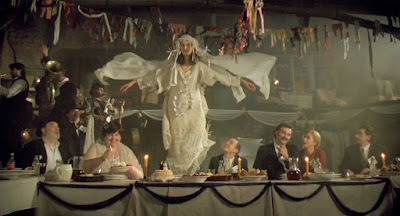 While the first part of the film is a frenetic World War II adventure with some off-kilter twists, it’s this central part of the film where the weird factor really comes into play. The underground band of refugees believes that the war is still going on, convinced by Marko into producing weapons for the resistance while he lives a lavish life above ground as a high-ranking Communist official and sells the weapons on the black market. His grandfather is in on the scheme too, manipulating time in the cellar so that everyone believes they’ve only been down there for 15 years--not 20. The twisted treachery of this set-up packs a serious allegorical punch (even before a peripheral character muses that “communism is a cellar”), accusing the Communist leaders on top of profiting off of the lowly common folk down below--who even learn to love them for it and never suspect that they’re being taken advantage of. 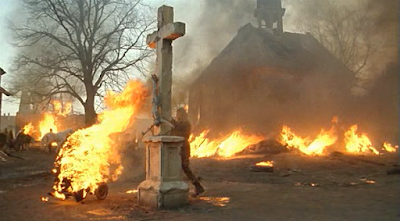 Of course, things don’t end in the cellar. A monkey behind the controls of a tank is enough to set a new revolution in motion. But to what end? Kusturica makes it clear that there is none. In the film’s apocalyptic final section, the characters reconvene in a hellish vision of the 1992 Yugoslav wars. There’s not a building left standing, no one left alive who’s not wearing a uniform and carrying a gun. A flaming wheelchair revolves endlessly around an upside-down crucifix, suggesting endless chaos and evil. But those who remain still have their memories, giving them a glimmer of hope that what was lost can someday be regained. Despite its nightmarish finale, Underground is never a preachy or depressing film. It blows up the trajectory of modern Yugoslavian history into a surreal fantasy vision that promises a look at the elusive truth lying beneath it all--even if, as Marko suggests, it all turns out to be nothing but lies in the end.