"Only pain and suffering will make you realize who you are. Only when you're in extreme pain, do you realize your own mind."

Takashi Miike is widely known for his outrageous shock tactics and lack of subtlety, but his most famous film, Audition, is notable for its surprising serenity. Make no mistake, Audition is definitely worthy of its classification as a horror film. There are moments that may send the viewer flying out of their seats - many involving a large bag positioned conspicuously in the middle of a tiny, sparsely-lit apartment. But most of the time, it's a quiet and subdued film - a symphony of loneliness and painful memories laced with a dark undercurrent of creeping dread. 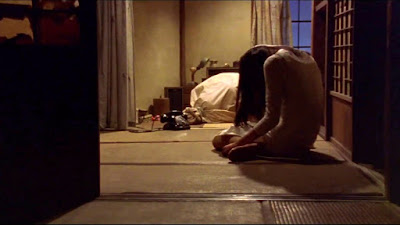 The film’s unassuming first act focuses on lonely widower Aoyama’s attempts to find a woman to marry who can live up to the high standard set by his late wife. Despite some subtly unsettling moments, Audition doesn’t really begin to show its hand until Aoyama is already head-over-heels with the girl of his dreams. But this isn’t to say that the film relies completely on the element of surprise. It begins with the death of Aoyama’s wife, whose memory continues to haunt him right up to the moment when he meets his new love, Asami, a young girl fixated on death. 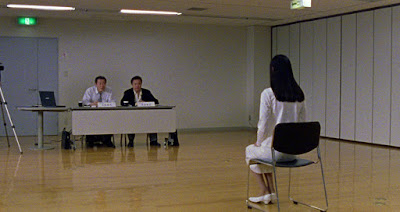 From the moment Asami first shuffles quietly into the audition room, something sets her apart from the women desperately trying to promote themselves in the awkwardly comic montage that precedes her entrance. Aoyama is blind to her oddness, but his producer friend is the voice of reason: there’s just something about Asami that doesn’t feel right to him. She’s too quiet, too polite, too hard to pin down. For Aoyama, however, these are positive attributes, and he soon starts seeing Asami in private. Surprisingly enough, she doesn’t see anything strange about his sleazy method of seduction. To the contrary, she’s grateful for it, and insistently pleads with him to continue taking her out. Intermittent shots of her staring motionless at the telephone in her apartment are the only signs that something is seriously wrong with this picture. 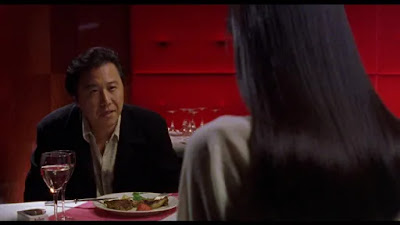 At this point, Miike steers the story into detective territory, as Aoyama begins looking for assurances that Asami is the normal girl that he desperately hopes she is. She mentions a family in Chiba, a part-time job in a Ginza dive bar, and a record company agent, but Aoyama finds none of these. Instead, he finds a perverted old man in a dilapidated ballet studio and tales about a grisly murder involving Asami’s agent and her supposed employer. But by this point, Aoyama is already deep in the girl’s clutches, having pledged his eternal faithfulness after sleeping with her on an ill-advised weekend trip. 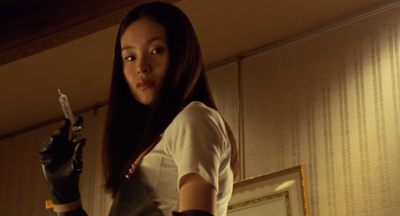 The film’s final act is a sweeping tour de force, beginning with an extended dream sequence in which all of the women in Aoyama’s life combine and merge into one. In an audacious subversion of narrative logic, Miike shows us a second version of Aoyama and Asami’s first dates. The scenery is the same, but the conversation is different. Asami describes brutal abuse in her earlier childhood, revealing the lies beneath her calm facade. Again and again, Miike sows subtle seeds of doubt in the viewer’s mind. Exactly how much of what happens is in Aoyama’s head, and which version of the story is the “real” one, is never explicitly drawn out - at least not until the film reaches its horrifying denouement, a proto-torture porn set piece that is both weirder and more concise than anything Eli Roth ever dreamed up. But as infamous as that denouement may be, it’s only one part of the masterfully structured psychological puzzle that is Audition.
Posted by Wise Jake at 3:02 AM