"I've always been meaning to get into the films of [insert semi-obscure director], but..." It's starting to feel like a mantra these days, but it's true: I've always meant to get into the films of Joseph Losey, but for years the only one I've seen has been 1948's The Boy with Green Hair. Despite its jokey title, that film is actually a serious movie about discrimination which can be enjoyed by children and adults alike. For The Servant, however, leave the kids at home! They won't know what they've just seen... and you won't know what to tell them! (That would have been a good tagline for this movie, actually.) It's stunning that such an insinuating, nasty, and morally ambiguous film was able to be released in 1960s England, although I'm not surprised that it was soon swept under the rug and has been pretty hard to get ahold of every since. 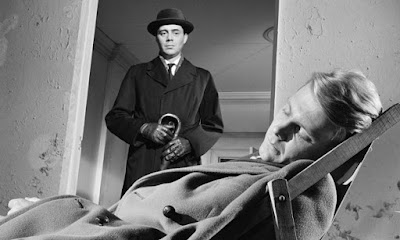 The film follows the complicated relationship between an idle aristocrat, Tony (James Fox), and his slyly ambitious manservant Barrett (Dirk Bogarde). We first meet Tony through Barrett's eyes, as Barrett catches him in the midst of a drunken afternoon stupor - despite his appointment for a job interview. It's immediately apparent that Tony needs some looking after - he even says so himself - and Barrett is the man to do it. Not that Tony's girlfriend Susan agrees. She's immediately suspicious of Barrett, a suspicion that soon grows into outright aggression. But why is she so suspicious? Because Barrett is a peeping tom who always happens to be around when the two are together? She almost seems jealous of Barrett, but why should she be? 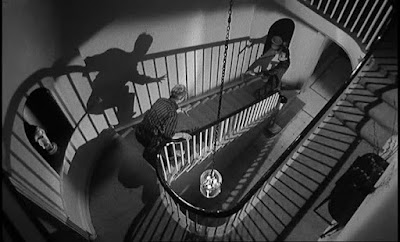 This is the question that The Servant asks, but never gives a direct answer to. In lieu of an answer, Losey only gives us more questions. Such as, why would a man with a beautiful and sophisticated girlfriend debase himself for a crass and incompetent servant girl? Why would someone take back a servant who had committed an unjustifiable offense in his bedroom? Why do some people destroy themselves for the sake of others when they could easily avoid it? Who is the master and who is the servant? Based on a homosexually suggestive novella by Robin Maugham, with a screenplay written by the class conscious Harold Pinter, this tense and disturbing Losey film fearlessly explores the class relations in British aristocracy. It's the rare film that doesn't present its intentions to the viewer on a silver platter, but forces them to open locked doors and probe into the shadows to search for what may or may not be hiding there. That The Servant concerns a power struggle between master and servant is never in question - but what exactly is at stake for both men in this struggle is one question that Losey is content to leave hidden in plain sight.