There have been a lot of movies made about the Mafia, but not too many about the Irish mob. In Miller's Crossing, the two tribes cross paths and attempt to coexist, but the Irish whiskey-drinking Tom (Gabriel Byrne) is at the center of it all. Compared to the lurid suspense of the Coen brothers' first film, Blood Simple, and the manic screwball comedy of their second, Raising Arizona, Miller's Crossing is a much more subdued film in general. Still, the Coens' signature style is all over this film - with a convoluted plot full of countless "ins and outs," obscure symbolism, and a constant undertone of irony. It also features the Coens' trademark plot device of a man caught in a downward spiral and overwhelmed by forces beyond his comprehension. 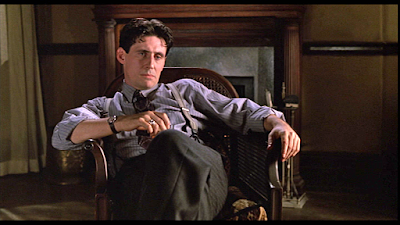 Initially, this downward spiral isn't that evident, nor are the Coens' usual trademarks in clear view from the start. This is a slow burn film, with the central conflicts of the story only coming into clear view about halfway through the film. What we do know is this: Tom is the right hand man for a political fixer and mob boss Leo O'Bannon (Albert Finney) who runs a Prohibition-era city. The city is never identified, but the Coens shot the film in New Orleans because much of its architecture dates back to this era. Tom and Leo share a strong bond which is able to withstand any argument or difference of opinion, but when the devious Verna Bernbaum (Marcia Gay Harden) comes between them, their bond threatens to collapse. It doesn't help that Verna's brother Bernie (John Turturro) has run afoul of one of Leo's underlings, an Irish mob boss with ambitions of his own. 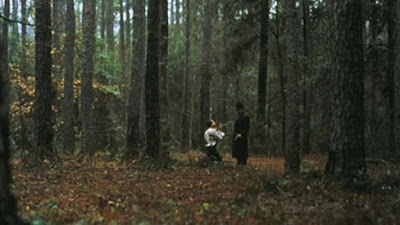 The plot thickens from here. There are countless nods to film noir and Dashiell Hammett novels, although the mood is different, more solemn and detached. One scene which sets the film apart from its source material is a brutal assassination scene set at the titular wooded crossing, a gut-churning moment of fear, power and moral crisis which has more in common with Bertolucci's The Conformist than Dashiell Hammett. There's also a scene in which Albert Finney jumps down from his bedroom window and mows down assassins in a bathrobe while "Danny Boy" blares on the soundtrack, but that's pure Coen. As for the hat floating in the woods, it's anybody's guess. Much like the tumbling tumbleweeds in The Big Lebowski, the answer is blowin' in the wind.