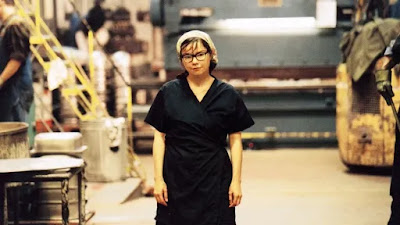 Dancer in the Dark is the third film in Lars von Trier's so called "Golden Heart Trilogy." I haven't seen the second film in the trilogy, The Idiots, but this film is definitely cut from the same cloth as the trilogy's first installment, Breaking the Waves. In Dancer in the Dark, von Trier pays tribute to the pure filmmaking standards laid out by the Dogme 95 manifesto, shooting most of the film himself with low-quality digital cameras, natural lighting and location shooting, but breaks the manifesto's rules on one point - the use of non-diegetic music. Because, in fact, Dancer in the Dark is a musical. 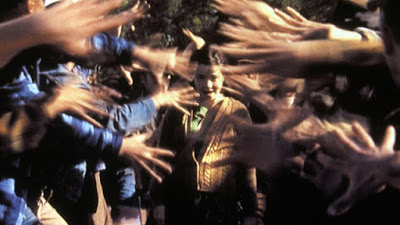 For those coming to this film having seen any of von Trier's other films, he would probably seem like an odd choice to direct a musical. And indeed, the musical elements never really gel with the rest of the film, a depressing melodramatic about an immigrant factory worker whose life spirals into tragedy as she begins to lose her sight. For one thing, the songs (sung by the idiosyncratic Iceland singer and lead actress Björk) are clunky and superfluous - adding little to the film other than giving us a break from the crushing drudgery of the main story. There's also a cruel irony to the musical sequences, which tease us that "nothing dreadful ever happens in a musical" even as von Trier repeatedly reminds us that this is one musical where that rule does not apply.

After finishing his "Golden Heart Trilogy" with his first English-language film, Lars von Trier embarked on another (as yet unfinished) trilogy set in the USA - despite the fact that he's never been there, due to a fear of flying. Dogville takes place in a Depression-era town in the Rocky Mountains, although it was filmed entirely on a bare, warehouse-like set with streets, houses, and even the town dog existing only as chalk outlines on the floor. The set is theatrical and minimalist to the extreme, while the story is narrated in Dickensian fashion by John Hurt and divided into nine chapters, evoking a fairy tale atmosphere that clashes with subject matter that grows increasingly bleak as the story unfolds.

Whereas previous films like Breaking the Waves and Dancer in the Dark had featured female lead characters made to endure unfathomably painful dilemmas, in Dogville, the humiliation endured by Nicole Kidman's Grace reaches absurd heights unusual even for the misanthropic von Trier. (It's potentially worth mentioning that Dogville features numerous instances of rape, which are largely written off by both the narrator and the other characters.) Because of this, Dogville is often difficult to watch, but it's a stylistic success if nothing else. Despite the minimalist sets, the film envelops the viewer fully in its punishing fantasy world, leading us through a tangled web of situations which force us to ponder the human capacity for cruelty and forgiveness. Still, much like the pretentious and self-important would-be novelist Tom Edison (Paul Bettany), the catalyst behind many of the story's twists and turns, von Trier might be guilty of many of the sins he accuses his characters of in this sprawling portrait of the evil lurking behind the innocent facade of a stereotypical American small town.