I hadn't seen a Takeshi Kitano film before this one, but right away the opening title card declaring this the seventh installment in the "Takeshi Kitano Directorial Series" told me that I was in for something outside of the typical mainstream fare. Not to mention that this is no ordinary title card, but rather a meticulously painted recreation of a director's notebook - an obsessive detail just like you might find in a Wes Anderson film. The opening credits montage that follows is even more striking - a series of paintings featuring angels and flowers, which happen to have painted by Kitano himself. Then we have a series of close-ups - two thugs in workman's uniforms, a tough guy in a suit and sunglasses, a half-eaten bento lunch on a car hood - followed by a couple long shots and an unexplained outburst of violence, after which we finally see the title: Hana-bi (Fireworks). How's that for a first impression? 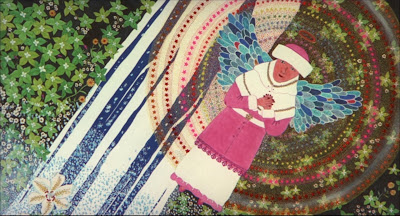 What follows promises to be a gritty thriller about cops and yakuza, but turns out to be anything but. When veteran detective Nishi (played by the director, using his pseudonym "Beat" Takeshi) skips out on a stakeout to visit his sick wife at the hospital, an ambush leaves his longtime partner wounded and another colleague dead. Nishi's partner Horibe (Ren Osuga) is confined to a wheelchair after his recovery, and abandoned by his wife and child. Nishi also leaves the force, for reasons that are never fully explained. There are implications that he unloaded his pistol into the body of a dead yakuza member in a fit of rage, but we only see bits of this episode in flashback. 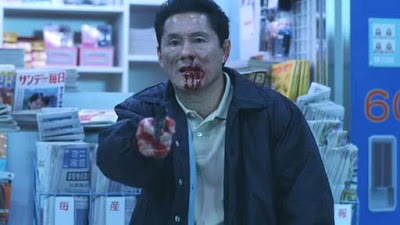 While it has its moments of brutal violence, Hana-bi is more about the aftershock of violence than the actual events. In one of their colleague's reminiscences about the past, we hear that Nishi and Horibe were once a great detective team, but we never have a chance to see them action. Throughout the film, Nishi is shown as a broken shell of a man, rarely uttering a word unless absolutely necessary. His primary form of communication is through violence, erupting without warning and punctuating his actions with Clint Eastwood-style one liners, or occasionally just a few grunts. On the other hand, the handicapped Horibe finds his own mode of expression through painting, which develops into a parallel storyline in which many more of Kitano's beguiling paintings are featured. 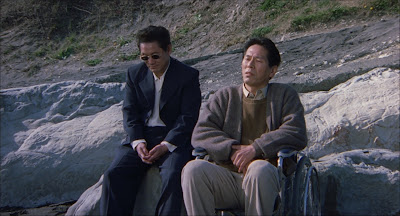 The amount of time that Hana-bi devotes to silence and stillness makes it tempting to label it as a "zen yakuza film." But despite its many quiet passages, it's still a surprisingly tense film. The characters are anything but enlightened or at peace. On the contrary, they're constantly in shambles - unable to connect or communicate effectively with anyone. In one surreal montage, which lasts roughly three minutes, Horibe gazes tearfully at flowers and imagines paintings of animals with flowers in place of body parts. It's a strange moment not only because of the hallucinatory imagery, but also because of the length of the sequence and the lack of any discernible context behind the images. As a result, we realize that this is a man with no connection to the world around him. All he has left in life are bizarre images conjured from his lonely imagination. 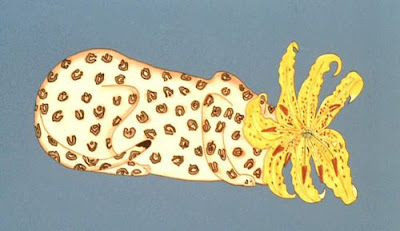 As for Nishi, his initial lack of response to everyone around him, initially irritating to watch, eventually takes on a heartrending quality. He plans a bank robbery to be able to take his ailing wife on a road trip around Japan, but when it finally happens, the two hardly ever speak to each other. At most, they communicate with tentative smiles, unable to find the words to express their feelings. Make no mistake: even though this is a film in which eyes are gouged out and blood spurts in slow-motion from gunshots at close range, it's also an overwhelmingly sad film. There is plenty of physical violence throughout, but the damage that the characters' souls sustain runs much deeper. The violence here is not meant for entertainment: Hana-bi is a searing indictment of the harmful effects of a lack of communication, as well as the ripple effect that violence has not only on the victims and/or perpetrators, but also on those around them.