Hollywood films of the 1930s are often like sparkling diamonds, while Jean Renoir's early sound films are more like unpolished jewels uncovered from the ash heap of history. But whereas La chienne and La nuit du carrefour could feel somewhat clunky in terms of their storytelling momentum, The Crime of Monsieur Lange is bursting with non-stop energy. Almost all of the action takes place in a cramped cluster of buildings within a single neighborhood - a frenzied beehive of activity where its always hard to get your bearings. There are women, men, and a wicked old publishing magnate who has his way with both of them. The publisher, Batala, is played by Jules Berry in what is much more of a star performance than René Lefèvre's portrayal of the titular everyman. Batala is as smooth and romantic as he is ugly and cruel. Rather than the classic femme fatale character that was seen in many films noir (with Renoir's La chienne as one of the prototypes), Battala is a true homme fatale. 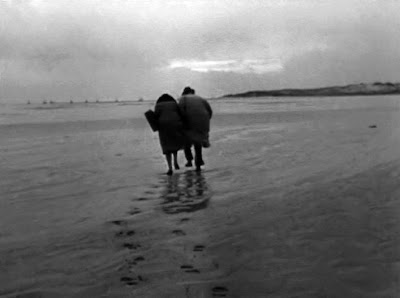 There is also a political dimension to the film, with Battala positioned as the "fascist" in whose absence the former employees of his company are able to fashion a working "cooperative" out of the company that once served only the man in charge. However, this angle isn't explored too deeply. What leaves a deeper impression is the ending. An old man in silhouette against a brightly lit window, a wolf in sheep's clothing, a murder in the shadows, and a couple on the run. As this film hasn't been properly restored for DVD yet, the bootleg copy I watched had awful sound and dull picture quality. Yet even so, the final shot is as beautiful as you will see in any film. We can only hope that this film and Renoir's other early works will get their due someday.
Posted by Wise Jake at 11:49 PM