Ken Russell's most acclaimed and most controversial film opens with the claim that it is based on "historical fact" and then quickly descends into a delirious imagining of the depths of 17th century religious hypocrisy. France has been devastated by wars between Catholics and Protestants, the Catholics have won, but the king is a debauched homosexual unconcerned with anything besides satisfying his own whims. In the small village of Loudon, a non-conformist Jesuit priest (Oliver Reed) has affairs with young women and declares them part of his quest to become one with God, while a power-hungry Cardinal schemes to have the independent town under his control and a sexually-frustrated nun (Vanessa Redgrave) suffers depraved fantasies about Grandier, eventually declaring him an agent of the devil sent to possess her. 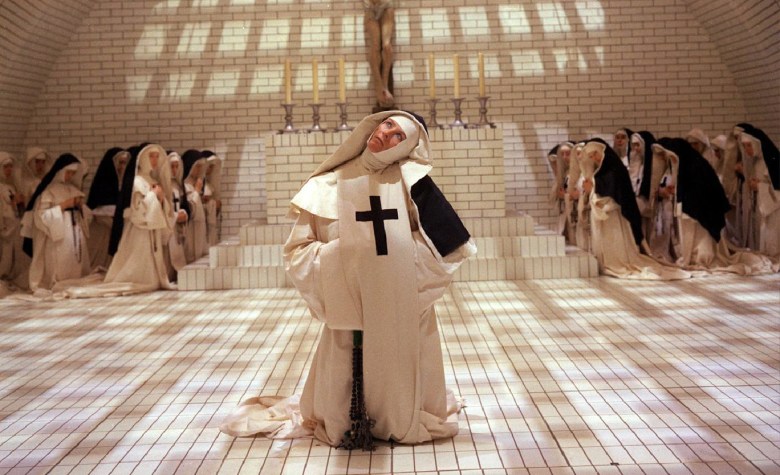 At least this is what Russell would have us believe. Beneath the claims of historical accuracy, however, The Devils is an extremely impressionistic film, with almost futuristic set designs by a young Derek Jarman and campy characters which often seem to pave the way for The Rocky Horror Picture Show rather than invoke 17th century France. And the extreme debauchery and cruelty on display here, well known as some of the most shockingly obscene imagery ever seen in a mainstream studio film, often crosses the line into lurid, melodramatic exploitation.

However, whatever redeeming value this movie might have can only be found by reading between the lines. Russell often seems to bombard the viewer with exploitative imagery, but what the film really shows beneath the surface is the variety of ways that people find to convince themselves and others that they are acting in God's name - when their actions precisely imitate the evil forces they claim to fight. Russell's portrayal of these themes might be seen as over the top, but it is in this way that we can see the true depths that people will sink to to protect their own delusion of religious piety - a statement that is as relevant today as it was in the 1970s or the 1630s. Make no mistake, The Devils is not a film about historical events, it is a feverishly surreal rendering of religious hypocrisy and human depravity allowed to run rampant.